After adding an the HTB OpenVPN profile to Kali Linux 2020.1, upon connecting to the VPN, an additional default route is added to Kali's routing table forcing all internet traffic to the HTB environment where there isn't actually an internet connection.

This blog post walks through setting up the VPN and removing the extra default route, plus scripting the connection to the VPN since it add the broken route every time the VPN connects.

Get your OpenVPN file from here: https://www.hackthebox.eu/home/htb/access 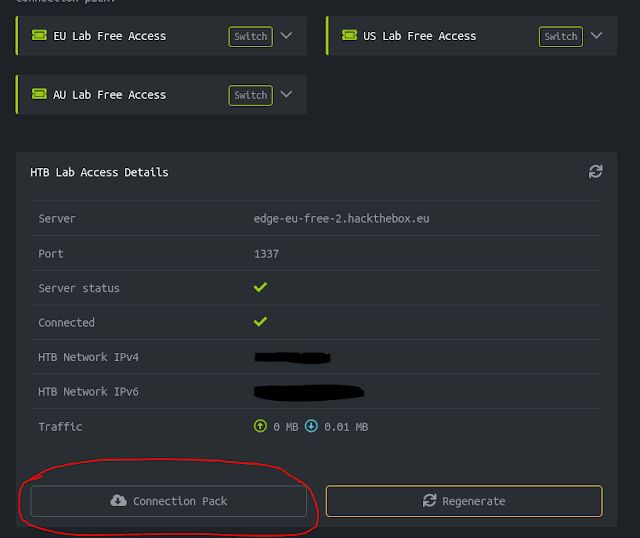 It comes downloaded as . I renamed my file to HackTheBox.ovpn. This will become the name of the VPN connection we see in the GUI.

Now to add the the OpenVPN connection to your list of linux networks:    Verify the new network connection was added:

In the top right of the screen you can also verify the VPN was added. Toggling the checkbox will connect and disconnect from the VPN respectively.

This guide is assuming 1 wired connection and 1 VPN connection. After connecting to the HTB VPN, some users may find their Kali Linux machine no longer can reach the Internet, but is still able to reach the lab environment VMs. This issue is due to the VPN connection adding a more preferred default route out the VPN tunnel interface.

If we remove the first default route, our internet bound traffic will use route 2. HTB traffic will remain unaffected and be handled by these two routes which are already installed in the routing table:

Removing the extra default route:
After running that the routing table is fixed:

Every time you disconnect and reconnect to HTB, you'll have to remove the default route. Here is a quick bash script to simply the connection process. Make a file called ConnectToHTB. To make it executable: chmod 755 ConnectToHTB
Added this to the file:
Replace d7aa1e3e-f13f-47b1-8c4a-a99d73bf4dd3 in the first command with the UUID of your VPN connection, which can be found using nmcli connection

Now to connect to HTB, ./ConnectToHTB from the terminal.

"Simple" Stack Based Buffer Overflow In stack based buffer overflows, all environments are different. While the exploit is the same as many others, the environment is not, so this post is for documenting what can go wrong. For clarity, this guide follows along to a LiveOverflow video where he creates a buffer overflow exploit: https://www.youtube.com/watch?v=HSlhY4Uy8SA tl;dr tl;dr for the compiler and environment problems this guide covers: gcc needs flag -fno-stack-protector when compiling - Some compilers add stack protection to protect against buffer overflows gcc needs flag -z execstack when compiling - Some compilers make stack memory non-executable, so you are unable to run shellcode that resides inside the stack Disable ASLR on Ubuntu 18.04.1 using echo 0 | sudo tee /proc/sys/kernel/randomize_va_space - Linux 18.04.1 LTS has ASLR enabled by default which randomizes memory address where programs load there stacks, heaps, vars, etc. Getting Start